What Happened To Simply Fit Board After Shark Tank?

Gloria Hoffman and Linda Clark, a mother-daughter team, are hoping to secure an investment from a Shark for their exercise board, the Simply Fit Board, in episode 708 of Shark Tank.

A Simply Fit Board is simply a solid, plastic board with a concave curve on which you stand. It trains your core by requiring you to maintain balance when standing.

The core is even more worked when motions are incorporated – such as a turning motion. You can also do planks with the Simply Fit Board.

The revolutionary product may help you burn fat, lose weight, tone your legs, improve your balance, and strengthen your core. You can see results in as little as six weeks if you exercise for ten minutes a day.

Linda and Gloria have been selling their products from the trunks of their automobiles for less than two years. This product, made in the United States, is available in five vibrant colors and retails for $44.95.

It is available in several retail outlets in Colorado, New Mexico, Kansas, Texas, and online.

Simply Fit has sold over 28,000 boards so far – that’s more than $1 million in sales! The boards are manufactured at Linda and Gloria’s Simply Fit Board Factory in Lamar, Colorado.

It is almost certain they need Shark assistance to streamline manufacturing and distribution. Are there any possibilities for a deal with Simply Fit Board?

What Is a Simply Fit Board?

Simply Fit Board is an easy-to-use piece of training equipment that makes it easier to exercise at home.

Simply Fit Board is meant to simultaneously trim the waistline, flatten the muffin top, improve balance, strengthen the core, and tone the legs.

It is a slightly curved board available in various colors; the user must rotate the board with both feet simultaneously on either side. As a result, one is unintentionally forced to strengthen the core to maintain equilibrium.

The lightweight, curved board is made of high-quality plastic and provides enjoyable twisting motions to strengthen your back, leg, and core muscles. You can also add free weights to make the workout more challenging.

Who Is The Founder Of Simply Fit Board?

Simply Fit Board was founded and is owned by Gloria Hoffman. Before founding Simply Fit, she founded and owned Legacy Leadership Team, a business executive mentoring firm.

The second project she worked on was with Zrii, a direct-sales company.

When she was 60, she began to gain weight around her waist. She enjoyed eating, and that led to her gaining weight.

Linda explains that when she joined her grandchildren on the skateboard, she quickly realized that it assisted her in all the right places.

She and her daughter discussed producing something similar, and the Simply Fit Board was born.

Their first sale was from the trunk of their car, and they ended up selling over 28000 boards. They appeared on Shark Tank to convince investors to increase production.

Simply Fit Board Before Shark Tank

The Simply Fit Board was created by Linda and Gloria, a mother and daughter team. Linda wanted to create a product to help her lose weight as a senior citizen.

Linda and Gloria collaborated to create and promote the Simply Fit Board to reduce belly fat more effectively.

Linda’s struggle to lose weight and stay fit at age 60 was a major inspiration for the board.

Linda enlisted the assistance of her fitness training daughter to develop an affordable and accessible solution.

Gloria designed the balance board to be used almost anywhere (on carpet, linoleum, or hardwood) for quick and easy training.

The mother and daughter team showed their product to numerous vendors across the United States to generate sales.

Before appearing on Shark Tank, they had sold nearly 30,000 units in nearly two years, which pales compared to what they would sell once introduced to a much larger audience.

Gloria assisted them in developing a new form of balance board. Can this reimagined version of the old concept attract the Sharks?

How Was The Shark Tank Pitch Of A Simply Fit Board?

Two women appeared in an episode of the seventh season of Shark Tank. Gloria Hoffman revealed herself as the shark’s mother to Linda Clarke.

A Simply Fit Board reportedly improves cardio, muscle strength, and balance when fighting the bulge due to its twisting motion. They provide dozens of exercises to go along with it.

Gloria begins her talk by stating that everyone struggles with various aspects of their body. Gloria continues, “these issues might easily be resolved by simply fitting.”

Linda Clarke places her board on the floor and steps onto it. The board strengthens Linda’s back while she balances on it.

Gloria takes a seat on the board. “It’s a balance board with a twist,” she explained.

Mr. Wonderful wishes to give it a try, and Mark agrees. Mark can hardly stand, but Mr. Wonderful seems quite uncomfortable on the board.

Furthermore, she points out that the board is composed of lubricated plastic to rotate on the floor easily.

Additionally, Glories states that most exercises can be changed to accommodate a slim fit.

Kevin O’Leary and Robert Herejevec utilize the board with the help of Mark Cuban.

Robert rises to his feet and spins deftly. Linda points out that the Sharks twirl in imitation of a skateboard toy.

They also created a companion platform; the combination of both is patented. Mr. Wonderful believes it is easily imitated.

The offer from Mr. Wonderful is $250K for 30%, which is more money for the same valuation.

Robert does not believe it is proprietary; he exists. Barbara previously had a negative encounter with an infomercial fitness product; she is no longer using it.

Lori believes this product is ideal for her, but they must act immediately. She offers $125K in exchange for 20%.

Lori advises the ladies to consider the Sharks’ backgrounds when making their choice.

Gloria inquires whether Lori would enter with Mr. Wonderful, and Lori declines.

Lori discusses the advantages of a deal with her, and Gloria answers with $125,000 for an 18% stake.

They complete the transaction, and Barbara declares that they picked “Beauty over Beast!”

What Happened To Simply Fit Board After Shark Tank?

The QVC Simply Fit Board video shows Lori and Linda leading an exercise group. You can still purchase it for $39.96 plus shipping and handling on the QVC website.

You can also purchase the Simply Fit Board website boards, including free exercises.

QVC sold out the following day after the episode aired, as they sold 500 boards every minute.

The product was temporarily unavailable around Christmas but now appears to be back in stock.

According to its social media pages, the Simply Fit Board sells workout DVDs for just $9.95.

They are currently working on the Board Mat, which will be available for pre-order on their website soon. Lori seemed like the perfect business partner.

Simply Fit redesigned its website immediately following the show’s premiere. Lori accompanied them on QVC the day after the show aired, and they sold three semi-trailers worth of stuff, completely exhausting their inventory!

A Lori Grenier-starring television commercial has aired since the commercial’s debut. It is regularly broadcast on a variety of cable television stations.

The advertisement is a blatant sales piece, extolling the board’s benefits and asking viewers to “act now.”

Following their air date, the mother-daughter combination reports having generated a million-dollar revenue.

The company had over $9 million in sales less than a year later. The product was also placed in every Walmart in the United States!

The company has generated over $160 million in revenue by January 2022 and is still in operation.

Is Simply Fit Board Still In Business?

The Simply Fit product has generated over $160 million in retail sales since it debuted on Shark Tank and has been offered by Home Depot, Walmart, Bed Bath & Beyond, Kmart, and other major retailers in the United States and abroad.

Simply Fit has expanded its product line with exercise DVDs featuring Rosalie Brown and exercise mats for use with Simply Fit Exercise Boards, referring to the company as “an incredible Cinderella story.”

Read More
Animated Lure is a rechargeable, robotic fishing lure, developed by Kanz Kayfan and Sobhan Sanaee, that they are… 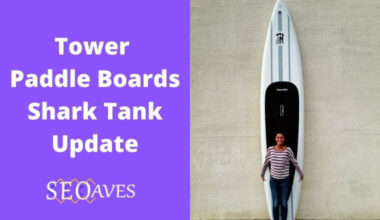 Read More
Stephen Aarstol, the founder of Tower Paddle Boards, has a proven track record of success. He made a…